We have eight amazing instructors from all over the globe!

Laura Glaess started dancing in 2001 in San Antonio. It wasn’t a very large scene, and her teachers hadn’t been dancing very long, but she quickly came to love lindy hop, the music, the history and everything involved.
Now Laura travels the world teaching, competing, performing and learning. She is a passionate believer in dancing with swing, with rhythm, and with presence. She is madly in love with jazz music and movement and strives to convey that love to everyone she encounters. Hailing from Austin, Texas, Laura is also an active participant in her home community; co owning a teaching company, The Lindy Project, with Mike Roberts, participating in the Austin Swing Syndicate board, the Austin Lindy Exchange board, organizing community events, and any number of things to keep Austin one of the best scenes around

Todd Yannacone is one of the most recognizable names on the swing dancing circuit today. He has won countless championship titles from the most prestigious competitions around – The American Lindy Hop Championships, The Ultimate Lindy Hop Showdown, The U.S. Open Swing Dance Championships, The National Jitterbug Championships, The Rhythmic Arts Festival, Lone Star Championships, The International Lindy Hop Championships, Lindy Focus – to name just a few.
Todd has been inducted into the California Swing Dance Hall of Fame, and has been interviewed for Swing Dancer Magazine, “The Track” podcast, and various other publications. He has taught vernacular jazz, Balboa, Shag, Lindy Hop, Charleston, and other jazz era dances both locally and internationally since he was 16 years old. His demand as an instructor, performer, and judge has taken him to 31 countries and five continents. He specializes in connection and musicality, which is apparent every time he steps on the dance floor. He has worked with dance and music legends alike, and is a member of the acclaimed dance troupe, the Silver Shadows.

Sonia and Héctor are a professional Lindy Hop couple.
They both teach Lindy Hop on a regular basis, every day in Barcelona, and, in recent years, have been partly responsible for promoting the success of the Lindy Hop boom nationally. With a joint experience of over 31 years teaching (Sonia 19 / Hector 12), they teach classes and workshops in various dance schools in Barcelona and other cities, and are working in some of the most important Lindy Hop schools.

They are continually involved in “spreading the Lindy Hop word”, venturing on as many projects as possible. Hector and Sonia are keen to demonstrate their love and enthusiasm for Lindy Hop through their work in the hope that others, too, can enjoy and learn the same. Hector and Sonia’s teaching perspective is focused on the fundamental aspects they find interesting in Lindy Hop; bouncing, partner communication and quality of movement form the basis of their teaching. From their own creative standpoint, teaching “cool” moves or combinations is not the priority, although they use them as tools for enjoyment and as a way for students to remember what they have absorbed during the classes.

Hector and Sonia always try to incorporate their own individual creativity into their teaching, often showing students their own originality and invention in steps and movements which they have developed. They do this to help the student on their own creative journey and inspiration. Feedback has shown Hector and Sonia that students enjoy clear examples to explain certain movements. 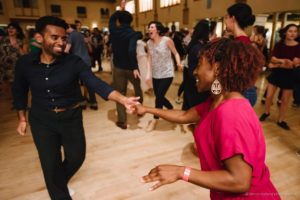 LaTasha “Tasha” Barnes is an internationally acclaimed dancer, educator and ambassador of culture. Celebrated for her musicality, athleticism, and joyful presence throughout all her dance forms including House, Hip Hop, Waacking, Vernacular Jazz, Lindy Hop & more.
Tasha expanded her artistic endeavors into Jazz and Lindy Hop in 2013 and has been honored to serve as an Ambassador Scholar of the Frankie Manning Foundation from 2014 to present. Since joining the Lindy & Jazz community Tasha has graced the stage of many events including “Hopping on the Hudson: Honoring Norma Miller” at the Rockefeller Estate where she performed alongside the legendary Sugar Sullivan, Barbara Billups, Chester Whitmore and Grammy-nominated jazz and blues recording artist Barbara Morrison. She has received national and international titles and acclaim in Lindy-Hop (Lindyfest 2016/2017, Lindy Focus 2016) and Solo Jazz ( BABBLE NYC/ Herrang Dance Camp 2016, Solo Mojo 2017). Tasha continues to develop her knowledge and performance skills across her many disciplines, striving to inspire fellow artists to cultivate an authentic sense of self in their creative expressions and daily lives.

Mo began his love for dance with the music—being raised since he was a baby as a musician, singer, and performer first in South Asian classical music, and Jazz later on as well. Although he had watched his sister and many friends dance throughout their lives, he did not try dancing until much later because he did not think he would enjoy it. He was very wrong.
Mo’s inspiration in movement comes from embodying the rhythm. He loves playing on the dance floor with his partner and values creativity, open-mindedness, freedom of expression, and humility. Mo is very passionate about respecting and innovating the traditions left behind by the original dancers. He believes that everyone can learn to creatively express themselves in their own body with enough time, effort, and critical thought. 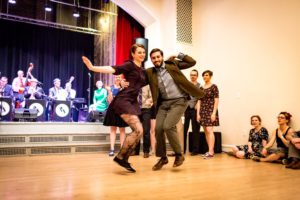 Kerry Kapaku comes from a long history of training, performing, and teaching ballet and contemporary dance. She has been dancing since she was just four years old, and holds a BFA in Dance Performance and Education from Ohio State University. Kerry was introduced to Lindy Hop and vintage dancing during her time at OSU, and has been teaching swing dancing since 2012. Kerry has a passion for teaching vintage dancing, and brings that enthusiasm into every class she teaches. She also has a love of competing, and has placed at events such as Lindy on the Rocks, LindyFest, Nevermore Jazz Ball, Heartland Swing Festival, and Midwest LindyFest. Kerry also specializes in St. Louis Shag, and is considered to be one of the strongest shag dancers in the Midwest. When she’s not teaching, competing, or performing in the region, Kerry serves as the President of Naptown Stomp Lindy Hop Society.

David Deenik‘s journey, since day one, in learning swing dance and Lindy hop began by traveling all over the Midwest and even across the country learning from the best instructors the international scene has to offer. Dave started teaching for his hometown scene Naptown Stomp in 2013. In and out of the classroom he loves to explore where and when momentum can be created in the dance and how partners can capitalize on it.
Dave is also a big fan and promoter of St. Louis Shag and is considered to be one of the strongest shag dancers in the Midwest. You may have seen him in shag competitions and performances at events like The Nevermore Jazz Ball, Southern Swing Challenge, Lindy Focus, and more. Ask him to dance wherever you find him!